The picture below shows the production PCB.

IN+ and IN-(GND) provide the power input to the converter board.
Input voltage range is 8V to 50V.

POT-(GND) and LED-(GND) and IN- are electrically identical and connected together on the PCB. Even though the three pads are electrically equivalent, please use the appropriate pad as labeled to keep ground current loops in their intended areas of the PCB.

LED+ and LED- provide the connection point to the LED(s).

The trimpot (VR1) provides a way to adjust the current output of the driver. The minimum current output will go to zero (LEDs OFF). The maximum current that can be efficiently provided to the LED(s) is dependent on the input voltage and the output voltage (total Vf of the LED load) and is hardware limited to a nominal 1300mA.

The trimpot is in parallel with the external potentiometer, so it can be adjusted to compensate for deviation in the potentiometer resistance. Most potentiometers have a +/- 20% or worse specification for their open circuit resistance.

Note, the trimpot has a nominal life specification of 100 sweeps – so it should only be used to configure the current limit, not to perform the dimming function. 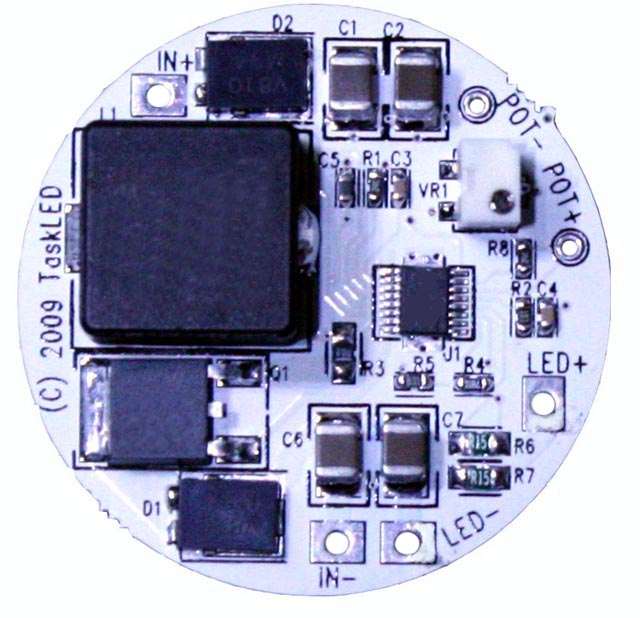 The next picture shows the key areas (inside the red polygons) on the bottom side of the Hyperboost PCB that require a good thermal path to the heatsink. At the minimum these locations require either thermal pad material (supplied) or a double sided thermal adhesive tape (e.g. 3M 10mil thick tape) to attach the driver to the heatsink. 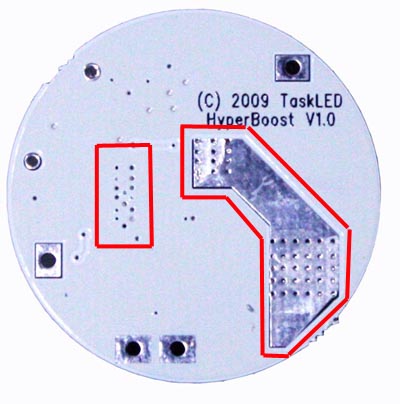 Using the Hyperboost driver with an external Potentiometer to provide dimming control.

To connect an external Pot, one wire connects to the Wiper contact of the Pot to the POT+ on the PCB. A second wire from one end of the Pot connects to POT- on the PCB. The Pot should have a Logarithmic Taper (similar to Audio pots), this will allow the intensity to appear to change linearly to the human eye. The onboard trimpot is adjusted as per the table and equation above. Prior to adjusting the trimpot ensure the external Pot is adjusted to its maximum resistance. Then the procedure is the same as above, measure the resistance across POT+ and POT- and adjust the trimpot as above. A 50k ohm Pot is recommended.

Note: Hyperboost dims by lowering the output current. As the output current is lowered the Vf of the LEDs will also lower, so, it is possible that the output voltage (total of the LED Vf’s) becomes lower than the battery input voltage. When this occurs no further dimming can occur because there is a DC path through the inductor and schottky diode (typical of boost converters) between the battery and the load and thus Hyperboost will essentially go direct drive.

Examples on how to calculate battery/LED combinations:

For calculation purposes we can assume efficiency will be around 90%

Do this calculation for the lowest Battery_voltage you plan to run

Now, Input_current should be around 5A or less for optimal performance of Hyperboost. When running at high input power it is recommended to use the supplied thermal pad material to mount Hyperboost to a heatsink.

Some efficiency measurements are shown in the following table to give an indication of what is possible.

Be the first to review “HyperBoost V3” Cancel reply