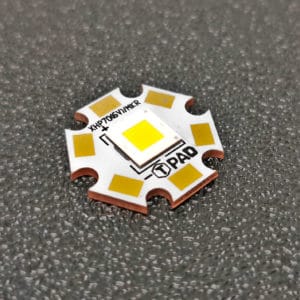 14 in stock (can be backordered)

19 in stock (can be backordered)

The XLamp® XHP70.3 LEDs are the third generation of Extreme High Power LEDs that deliver the best lumen density, reliability and optical control available in their size. By leveraging the XHP family advantages, lighting manufacturers can significantly reduce their system cost by using fewer optics, PCBs and heat.
The third generation XHP family LEDs deliver improved optical performance versus the previous generations, with higher intensity through optics than the second generation and the XHP family’s highest on-axis intensity. XLamp XHP70.3 LEDs are optimized for outdoor and premium indoor lighting applications that require large amounts of light output from small luminaires, such as stadium, outdoor area and architectural spotlight.