9 in stock (can be backordered)

The supplied thermal pad material is nominally 0.29mm thick, white in colour and will conform to the heatsink and PCB surfaces to provide an excellent thermal path.

The thermal pad material (Bond-Ply 100 0.29mm) specifications can be found in the datasheet a copy of which is available here. The Bond-Ply material is more than adequate to handle the heat transfer from the HBFlex to the heatsink. The material is white in colour and has a protective cover on both sides that must be removed to expose the adhesive. Note, it is recommended to remove the white protective cover first and fix the pad to the heatsink or the HBFlex prior to removing the transparent protective material. The adhesive is an acrylic base and takes up to 24 hours for fully cure/set. Once the driver, thermal pad and heatsink are in contact with each other, apply reasonable hand pressure for 20 – 30 seconds to help start the adhesion process. 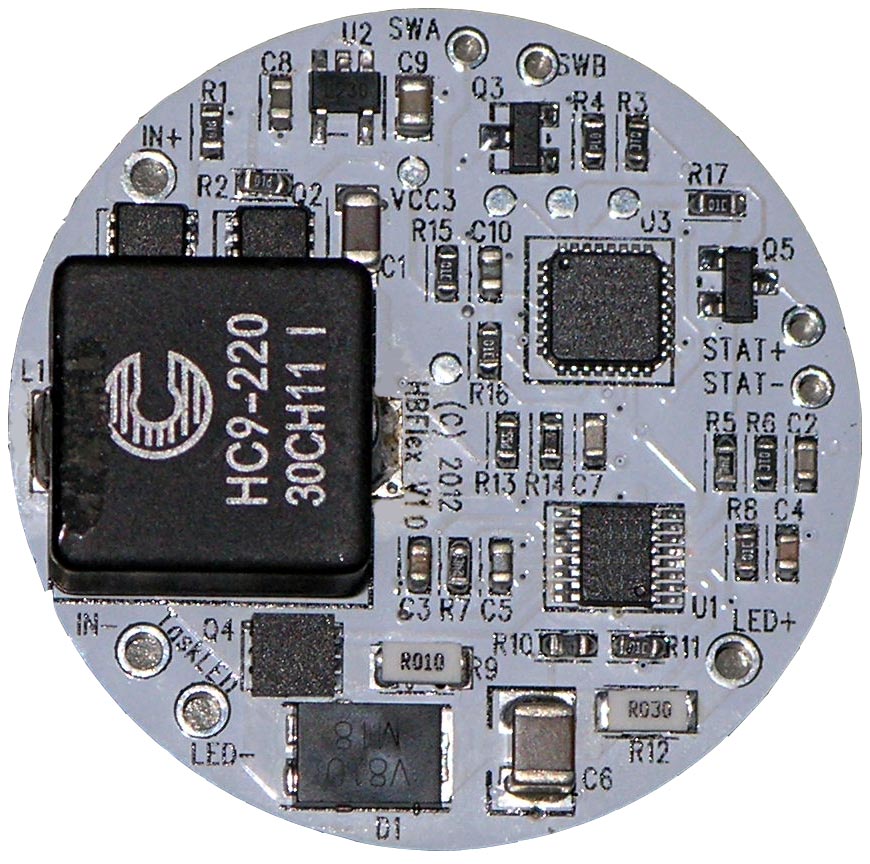 The IN+ and IN- pads/holes are the input power connections to HBFlex. Pad hole diameter is nominally 0.055″. 24V MAXIMUM input voltage (5 li-ion cells).

Input operating voltage range is 7V to 24V. HBFlex is capable (but not guaranteed) of running as low as 6.5V.

The LED+ and LED- pads/holes are the output power connections from HBFlex to the LED load. LED- IS electrically the same as IN-. Pad hole diameter is nominally 0.055″.

The STAT+ pin can be wired the the cathode of a status LED. Pad hole diameter is nominally 0.040″. The anode of the LED should be wired to a current limiting resistor and then to IN+. It is the user’s responsibility to calculate the necessary resistor value to limit the current to the LED. The resistor value can be calculated using the following equation.

As an example, for 10mA to a Red LED with Vf of 2.5V and running from 16V battery voltage:

STAT- is electrically the same as IN- and is typically not used.

The SWA hole is for one side of an external momentary action switch. The other side of the switch must be wired to SWB (which is electrically the same as IN-). The switch only switches a control signal and carries at most 350microamps. If using a magnetic reed switch, wire it across SWA and SWB. Pad hole diameter is nominally 0.040″.

Note: it is recommended to keep the maximum wire length between the switch and HBFlex less than around 8 ” (20cm). Having wire leads that are too long can cause the wires to act as an antenna and cause HBFlex to respond irregularly or turn on/off by itself.

The following picture shows the bottom side of the HBFlex driver. The areas marked within the red boxes are the areas that at a minimum need to be making contact via the supplied double sided adhesive thermal pad to a heatsink if the power dissipating of the driver exceeds 1W. 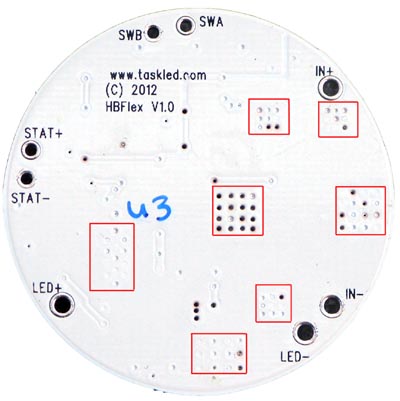 Note, HBFlex is a Boost regulator (step up), so input voltage must be less than the output voltage to ensure HBFlex remains in regulation. If the input voltage exceeds the output voltage (at the specified drive current), HBFlex will no longer regulate and the input voltage will go through the series inductor and schottky diode directly to the load. This will cause the output current to a LED to rise rapidly since LEDs have a very steep Current vs Voltage curve (Vf), with the risk of damaging the LED and/or the HBFlex driver.

Examples on how to calculate battery/LED combinations:

For calculation purposes we can assume efficiency will be around 90% (or see the section below).

Do this calculation for the lowest Battery_voltage you plan to run

Note, Input_current must be less than 7A for optimal performance of HBFlex.

The HBFlex driver was connected to an Electronic Load and Powersupply utilising 4 wire sensing on both instruments to enable accurate efficiency measurements to be take.

Adequate heatsinking is essential when running at high output power.

To determine the heat being dissipated on the HBFlex driver, subtract the output power from the input power. Dissipating 10W from the hbflex is well within its capabilities as long as it is mounted with the supplied thermal adhesive pad material to an appropriate heatsink.

As power being dissipated increases beyond 1W the thermal path to the heatsink becomes critical to reliable operation. Most of the heat being dissipated in the driver is from the power FET Q4, D1 and the inductor, L1. The thermal interface (bottom of the PCB) is tied directly to the bottom of Q1, D1 and L1 using thermal vias. Additionally the input FETS (Q1, Q2) and the switcher IC (U1) have thermal vias to the bottom of the PCB. Mounting an adequate heatsink with the supplied thermal pad material is recommended and will allow HBFlex to be run at high power reliably.

Tests performed with 1 Bridgelux LED array driven at 3A with a Vf of 31V (total 93W output) via HBFlex show that the HBFlex PCB temperature will be at most 17C hotter than the heatsink when used with the provided thermal pad material. These results were with HBFlex just resting against the thermal pad material (no pressure applied), so good performance without extra clamping force.

The HBFlex is a switching regulator based driver and contains a shielded Inductor (L1 in the picture above). Strong external magnetic fields such as from a magnet used to operate a Hall sensor or Reed switch can interfere with the Inductor’s operation. It is recommended to maintain a minimum of 1″ from the Inductor and any external magnet. If the magnet is very powerful, then the distance needs to be increased (more than 1″) as needed to minimise interference to the Inductor.

Areas of the circuitry on HBFlex utilise high impedance paths and if potting (not required) is to be utilised, the user must ensure than the compound is non-conductive and non-capacitive (e.g. Arctic Alumina – NOT Arctic Silver) otherwise correct operation may be compromised. The same consideration is present if using thermal epoxy is used to mount the HBFlex driver to a heatsink.

Be the first to review “HBFlex” Cancel reply