The new Cree 5050 mid power K class led, due in production in Sept 2020 will be a 220 lumen per watt variant of the 5050 product range. Its a considerable jump in performance over existing 5050 plastic package leds and a big step forward when one considers the limits on most multi die mid power leds. The analogy being that the constraints on multi die, notably COB devices is cumulative heat build on die in close proximity that always weighs on efficacy, despite heat sinking.

If we can achieve 220LPW+ on such packages, then is the high power ceramic power led under threat. I dont have costing on the new 5050 product at the time of writing but even at half the cost of the power led, its begs the question, have mid power leds arrived at a place to now completely dominate the fixture market.

Lets consider aspects of this in more detail.

If we look at the new 5050 chip, immediately we can see Cree have moved for a Round LES(Light emitting surface) to a square LES. If surface illuminance is a key determinant in efficacy then the gain in light from the square LES is going to be a clear with this new design 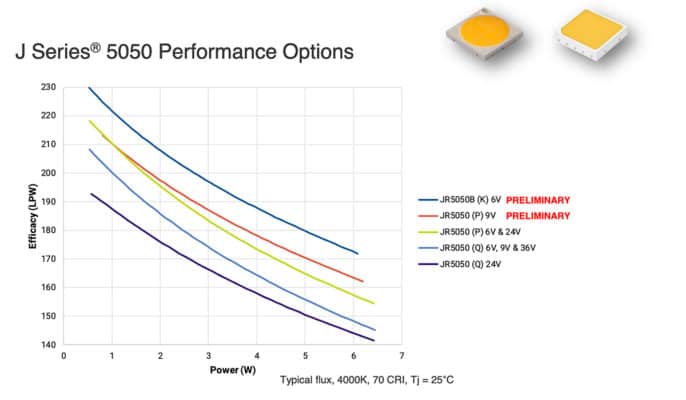 The use of multiple die devices have changed the way we light. The ability to gain huge amounts of light from COB devices as an example has been profound, however the challenging factor on light on target remains optical performance, wide beam is where these multi die devices thrive ie domestic downlights using reflectors. It can best be considered in terms of distance. High Lux, distributed beyond 3 metres, in a form or shape that can be considered useful or compliant with vast regulations re distribution is work in progress 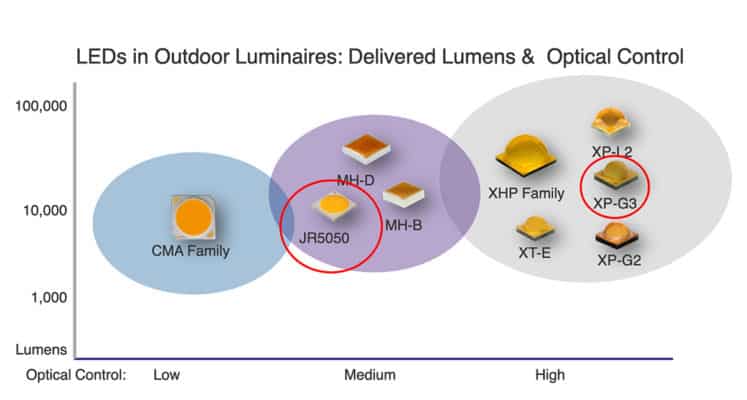 Do plastic mid power go the distance. Its very much dependent on several factors, drive current, drive topology, heat sink design. As a general rule ceramic based power leds have a proven history over the long term, but without adherence to design principles they can be subject to the same poor performance. So performance of mid power can be improved but would require an increase in cost in design parameters and would need to be considered then in the total product cost 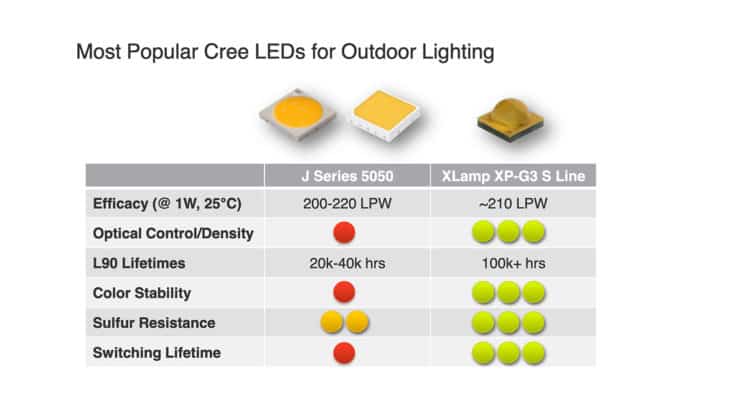 If we address first the issue of Lifetime, its clear from the chart projections, ceramic will perform well beyond midpower. This is a common difference. The issue is does it really make a difference in terms of customers expectations. The promises of light bulbs that last for ever has never clearly been something customers seem interested in or are prepared to pay for for, by its very nature, the low cost midpower led exist as testament to that very notion.

Colour shift is perhaps a more important component aspect to be considered, of no real issue for consumers, it is important for commercially lit property. Chromatic changes are a constant challenge for designers and manufacturers of luminaires. It gets back to design, if the power(watts) of bigger mid power leds is to meet and beat colour shift, newer fixtures will need to be made to accomodate 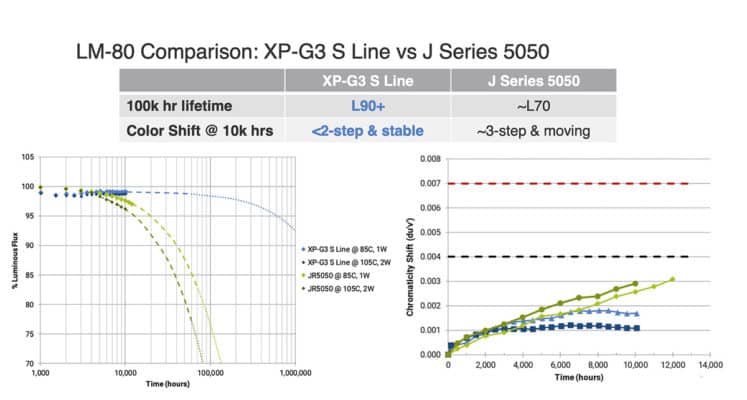 The final graphic illustrates a comparison of the 5050 vs XPG-3, based on an outdoor fixture application. This example highlights the product difference’s in that for applications beyond 3 metres, Ceramic remains a compelling choice, for those less than 3 meters then all bets are off 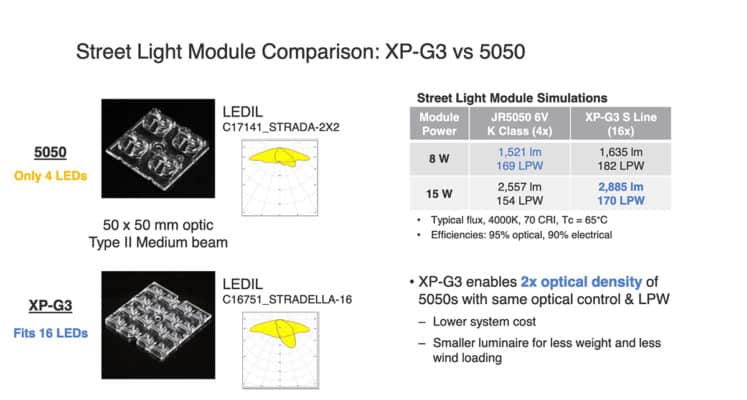 Check for regular updates on our Blog pages. We post our own BLOGs and material we consider valuable from other BLOGGER sources or feel free to submit an article for us to publish